Charlotte and Neptune surprised us with an "unauthorized" litter Earth Day 2022. While we always enjoy breeding, raising, and training our puppies, we generally like to be the ones in control of these things. We spend countless hours planning for upcoming breedings, trying to match personalities, body types, behaviors, pedigrees, health information, COI information, etc. to ensure the best match. The dogs sometimes have other ideas and "do their own thing"! We welcomed two dark boys, Top of the Hill's Gaylord Nelson and Top of the Hill's Frank Moe on April 21st, 2022. 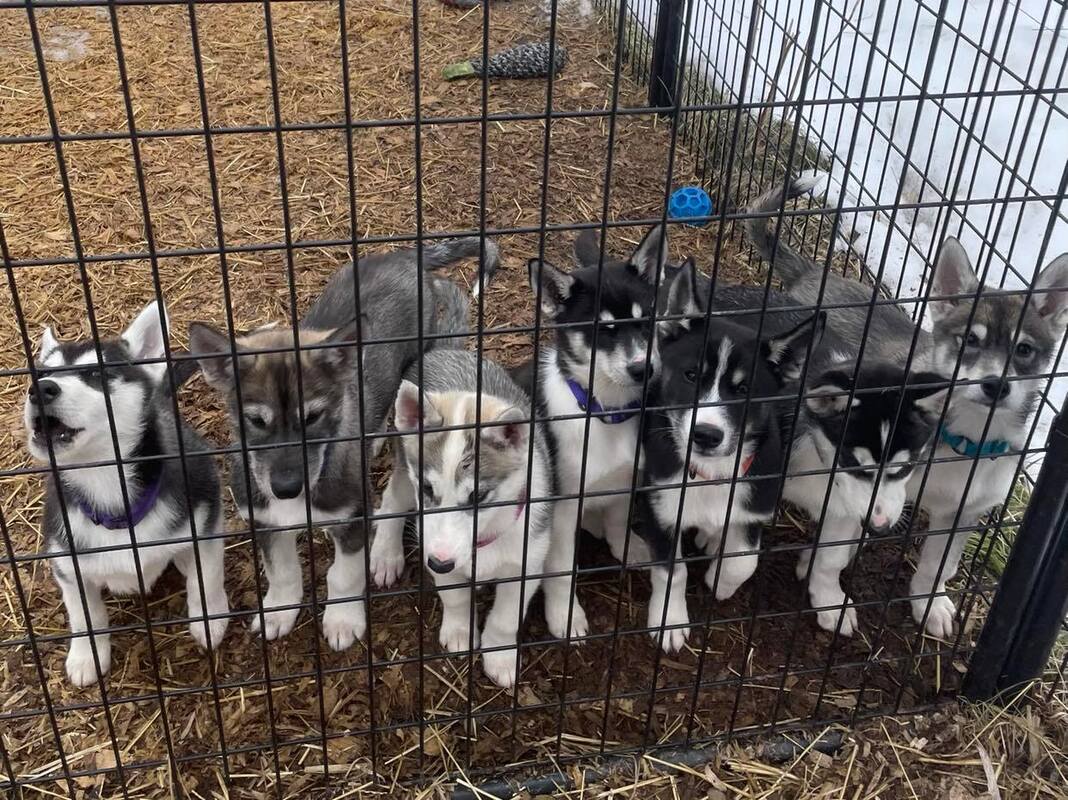 Top of the Hill Huskies welcomed three beautiful puppies on Memorial Day 2021 out of Royal and Milly. We were blessed with three females named Anne, Charlotte, and Emily for the Brontë sisters. Charlotte was Diane's pick to stay with us, and Anne (now Mazikeen) lives with her half sister Helga and Emily (now Army) lives with a fellow registered breed sprint racer. We are very much looking forward to watching these three girls throughout their lives. 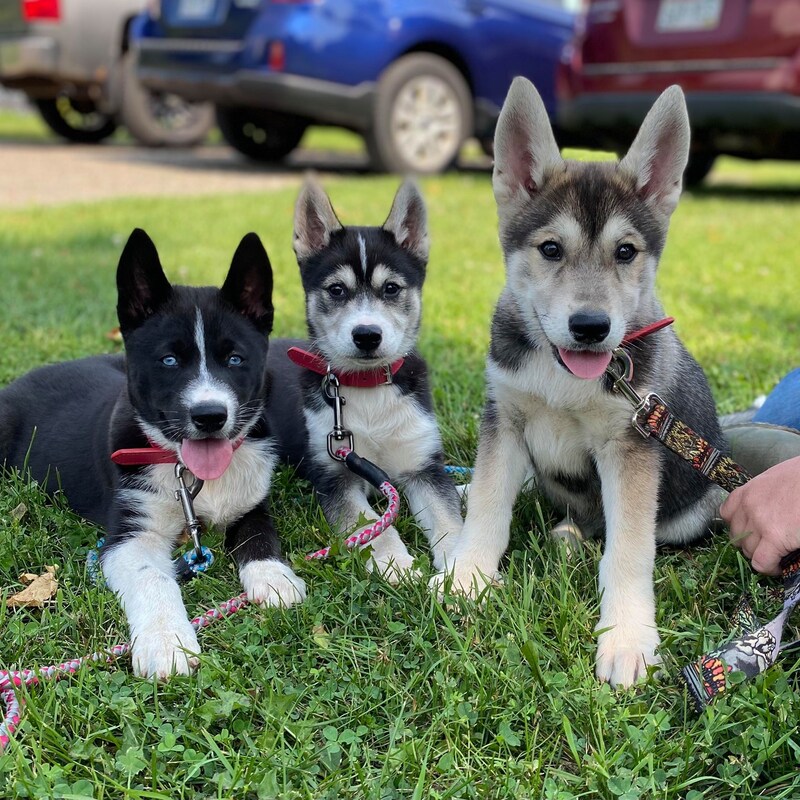 When thinking about the best male to pair with Preakness for her last breeding, we were focused on genetic diversity, a specific sire line, and the performance that we love. Our plan was to try a dual sire with brothers Euchre and Uno, but to our surprise Preakness and Siren had some other plans. The good news is that Siren has the same sire line. We gave Euchre some attempts to produce a pup or two, but our dual-sire attempt resulted in all Siren pups, and these 7 adorable babies were the tumbler litter. We welcomed 1 male and 6 females: Stanley Thermos, Yeti Rambler, Nalgene Widemouth, Klean Kanteen, Takeya Traveler, Hydro Flask, and S'well (Another Girl). Stanley and Yeti stayed here with us at Top of the Hill Huskies.  Nalgene and S'well went to live and work with Furricane Siberians. Kanteen went to live and work with Loverunners in Colorado. And Takeya and Flask are living in pet homes. 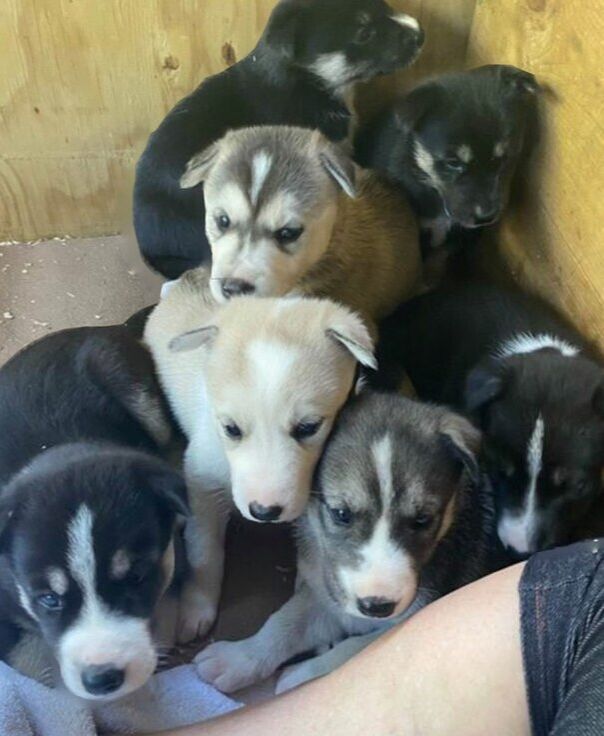 We have been so impressed with Scurry, our oldest working female, who is all-around a great dog and leader. We have heard a lot about Deuce of Jedeye, Scurry's father, and really wanted to bring that line of Siberian more to our kennel. Our close friend Adrienne Hill has a beautiful male, Al, who Amelia has grown to know and love, so he was a great choice as he has Deuce twice in his pedigree. We also wanted to get a litter out Milly who so sadly lost her first pup with us. And so, with a nice visit from Al, we were able to produce one our best litters to date, the April Fool's litter. Hilaria, Joker, and Shenanigan stayed with us at Top of the Hill Huskies. Riot and Prank (now Wiley and Robbie) live at Stari Nite Farm. Frolic lives with Diana Oudes and many other Siberians including two past puppies of ours. And Caper (now Togo) lives and works in Russia with Yuliya Litvinova of SnowShade Siberians. 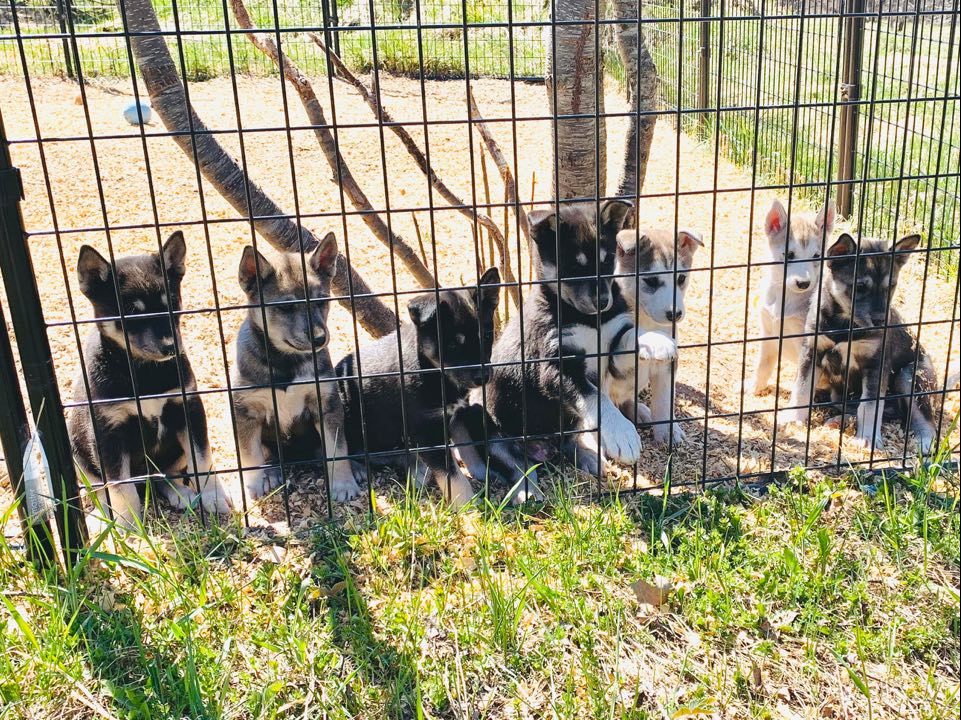 Euchre had been a dog we tried multiple times to get a litter out of. His daughter was our precious Wanda and he sure was a special dog. We got Milly as a nice sized female for potential breeding, and this was our first opportunity to have pups out of her. Milly had a singleton via c-section, but unfortunately while recovering Milly accidentally killed the baby girl after the vet team failed to care for properly for her. We called the puppy Murphy because in dog breeding, whatever can happen, will happen. 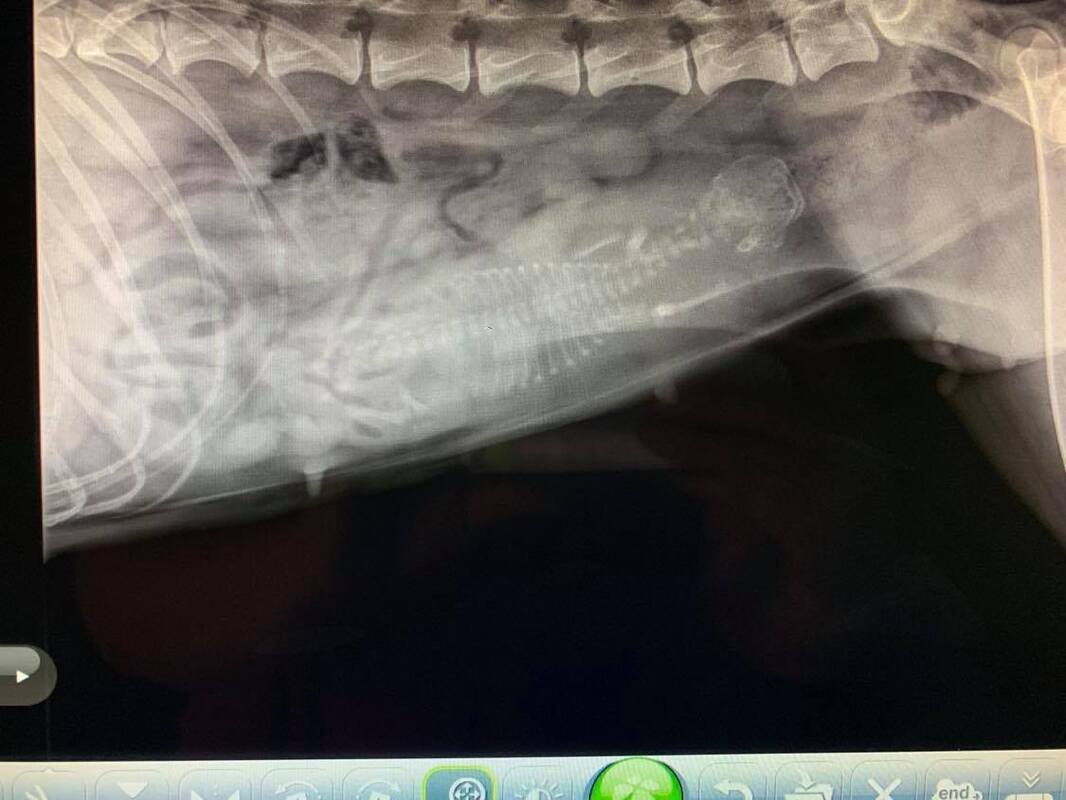 Moon is a great example of a young male dog, leading and showing great confidence. Blossom has also led, and as a very genetically diverse but well built female, we hoped for a nice litter, and we weren't disappointed. Named for the Madeline Island Ferry Fleet, this litter featured Nichevo (now living with Benoit Cyr), Madeline (now living with Heidi Duket), Bayfield (living in a pet home), Island Queen and LaPointe (both living with us). 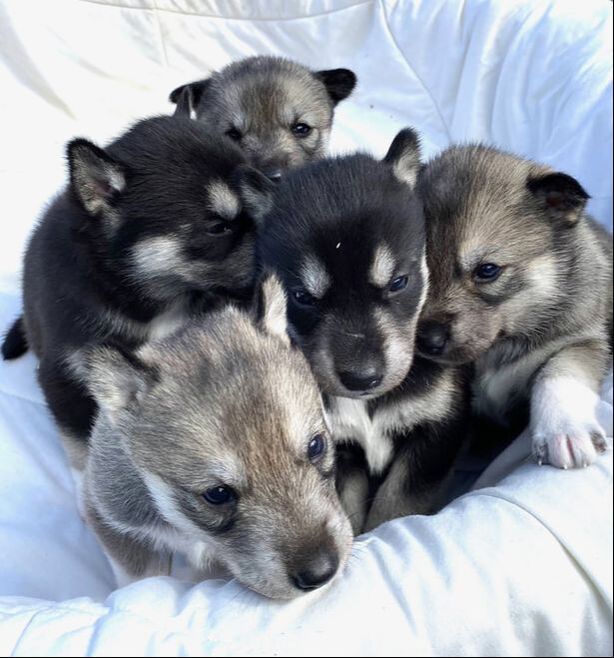 This was a long awaited litter out of Amelia's best female, Wanda. Amelia did an outcross to Neptune to see if we can blend the best of our two prominent lines. The two boys were born via c-section, and tragically Wanda passed away a few hours later from Pulmonary Embolism. She lives on through her two gorgeous boys, Eddie and Clark named for our favorite holiday movie, Christmas Vacation. 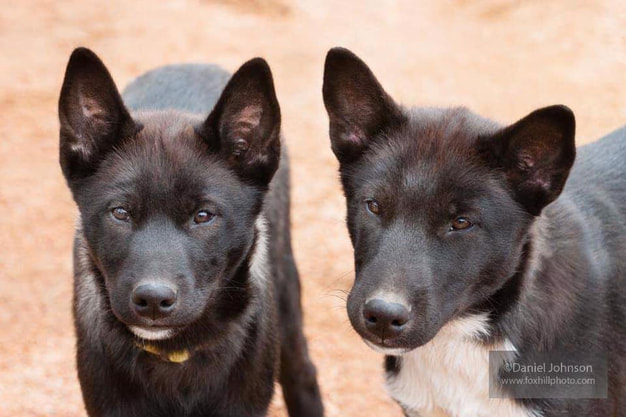 These puppies born in the middle of winter needed a Christmas theme, as they were a gift a long time coming for Amelia. We decided on a Christmas Tree litter theme, including Blue Spruce "Spruce", Fraser Fir "Fraser", Juniper Tree "Juniper", Tamarack Pine "Tamarack", and Cedar Tree "Cedar". This litter is the culmination of many failed litters for Amelia. She did a purposeful loose line-breeding hoping for a consistent group of pups. All five pups are now here at Top of the Hill Huskies. 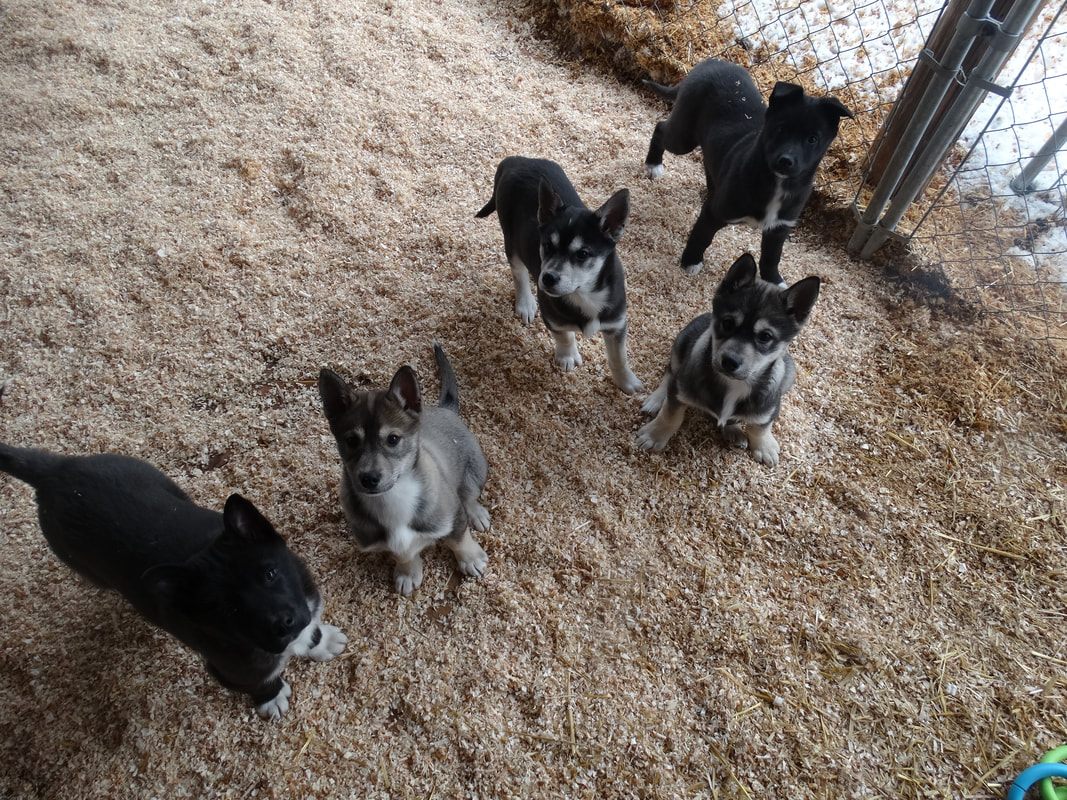 We chose a Celestial Events theme for the litter as August 2017 was an active month of astronomical phenomenons. This litter includes Full Moon "Moon", Perseid's Meteor Shower "Meteor", Partial Lunar Eclipse "Luna", Black New Moon "Blacky", and Total Solar Eclipse "Eclipse". This litter wasn't planned, but turned out to be an exceptional group of puppies that we kept two puppies from. 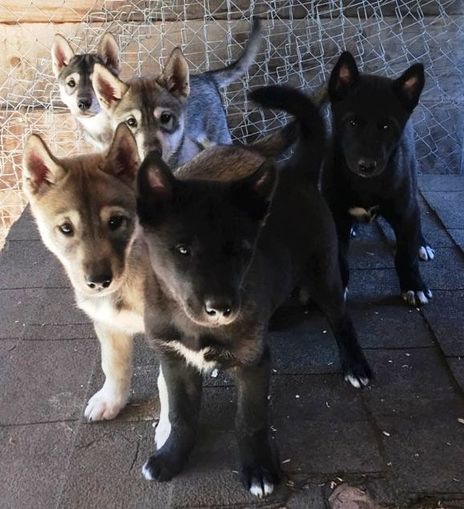 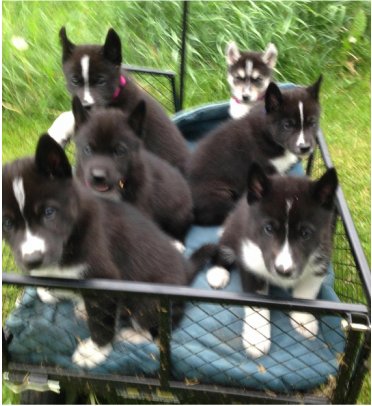 The Triple Crown Litter was born the summer American Pharoah won the Triple Crown. This was a highly anticipated litter out of two of our best leaders, and all three puppies stayed here with us. Names include Belmont, Preakness, and Derby. All three stayed here at Top of the Hill Huskies and are incredibly influential to us. 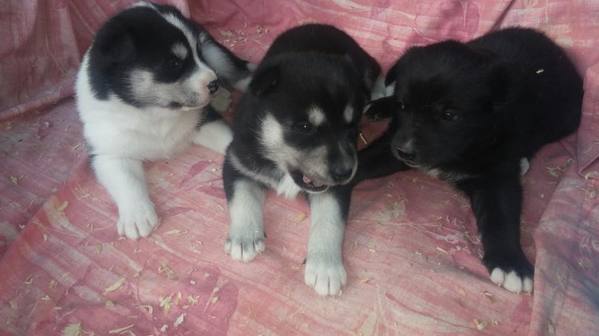 This litter was nicknamed after the great lakes.
Names included Huron, Superior, Michigan, Erie, and Ontario. 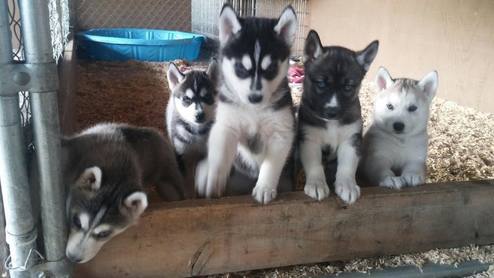 This litter was nicknamed after the cartoon series, The Powerpuff Girls.
This litter included (from left to right) Bubbles, Professor Utonium (Toni), Blossom, and Buttercup. 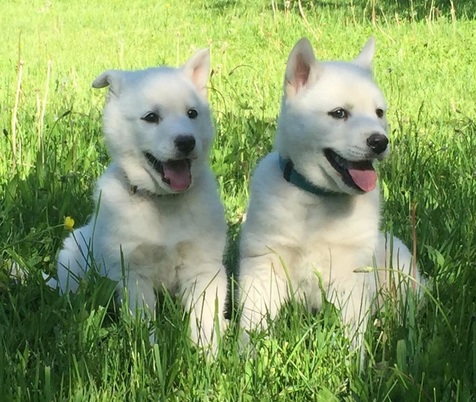 This litter was named after the cartoon, Popeye the Sailor Man.
Puppies were nicknamed (from left to right) Popeye, Olive Oyl, Bluto, and Swee'Pea. 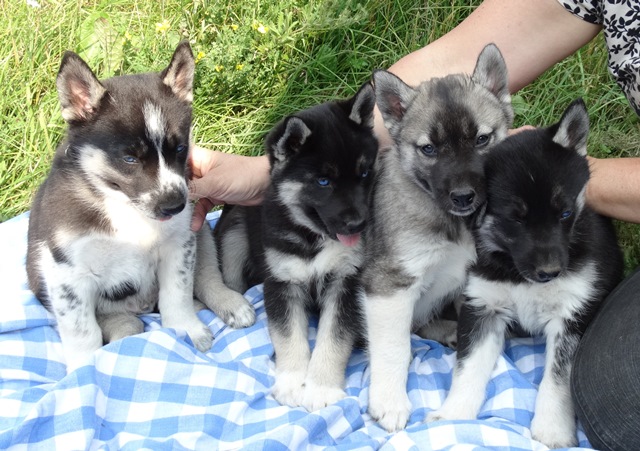 This litter was nicknamed after some of the original foundation dogs in the Siberian husky lines. There were two white females and five males in this litter. Left to right goes Basco, Tuck, Tserko, Fritz, Melba, KreeVanka, and Nan.

This litter was nicknamed after some of our favorite current and past Iditarod mushers. Diane picked names based on the letters A, K, E, E, L, A, H, and G, inspired by Akeelah, our first and most precious husky who we lost on November 11, 2013. Names included Aliy, King, Ekran, Ellis, Lance, Anderson, Hendricks, and Giblin. 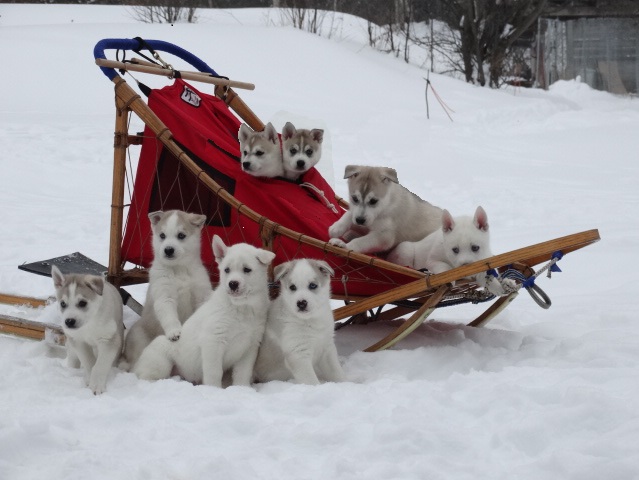 These puppies were quite chubby when they were born. We affectionately called them little pigs, which inspired our nicknames for them.
These three little pigs nicknames were Fiddler, Fifer, and Practical (named after the 1933 Disney film Three Little Pigs). 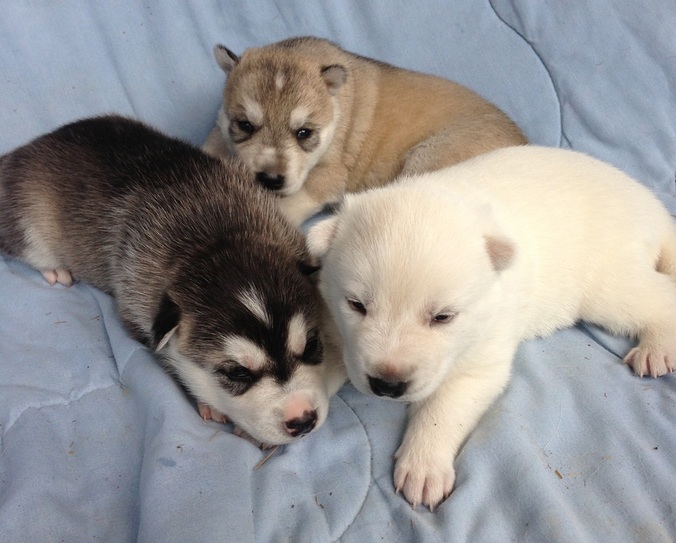 Amelia has always been keen on mythology, and this litter was named after Norse Gods. We chose the Norse myths because of the Avengers movie franchise and the gods named Thor and Loki (Amelia's favorites).
These puppies' names included Odin, Thor, Moon, Loki, Balder, Sif, Nanna, and Frigga. 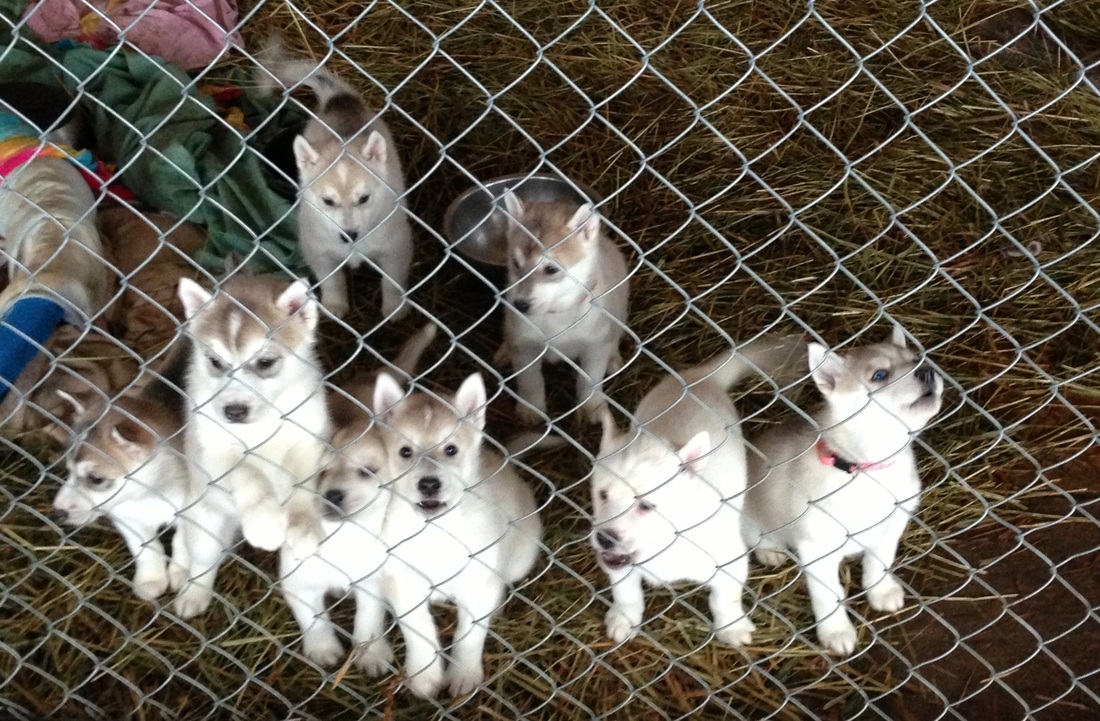 Our family's favorite summer pastime is camping. We have a Dutchmen camper and have noticed some cute camper brand names on our adventures, which is where this theme came from.
Our "Camper Litter" included Jayco, Dutchmen, R-pod, Scamp, and Montana. 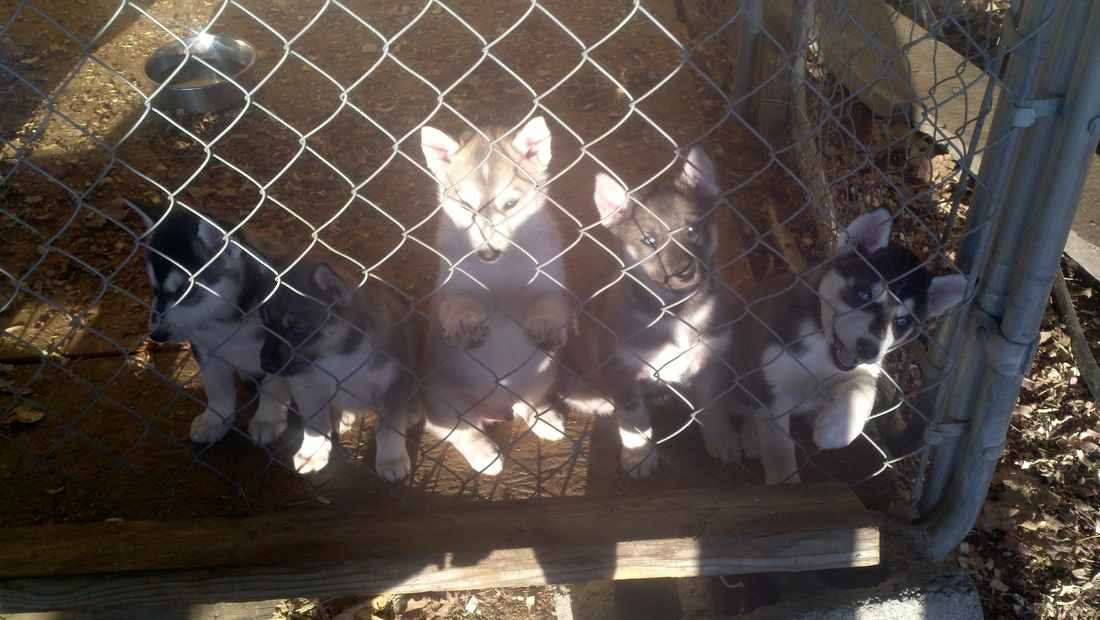 When we purchased Dove from Celtic Moon Siberians, she had an unplanned breeding (nature is sometimes stronger than a dog owner's will). This litter was born shortly after Dove got settled here.
They were delivered in two different months: May and June. Diane decided to name them after the months they were born in. This litter included Mayble, Junior, and Juniper. 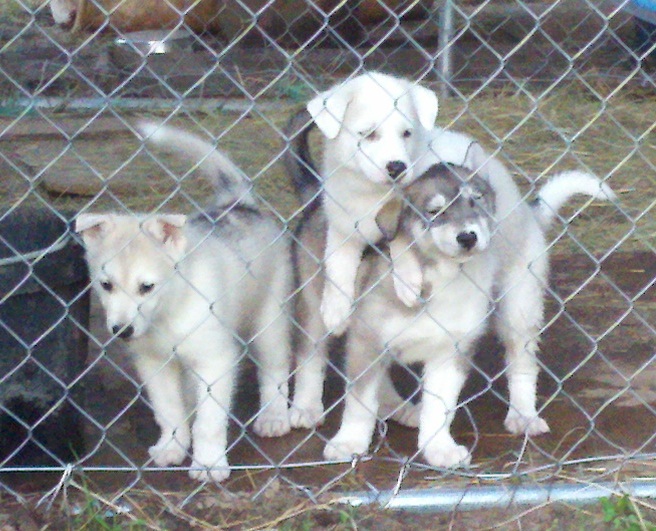 This was a mis-matched litter, with no real theme.
Names included Rocky, Bullwinkle, Chukchi, Doug, Philip, Delilah, and Gus.

Our first puppy was born during deer hunting season. He was also born via c-section.
We named him Buck. 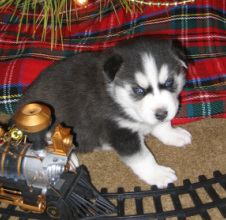