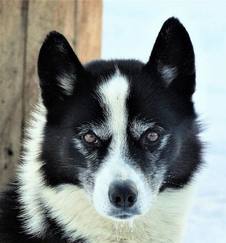 Brick is one of the many dogs we found up in St. Ignace at Chuck Cullip's kennel. We brought Brick home along with three of his children. He was an older gentleman when we picked him up, but he was a proven race dog and could lead for us which was something we greatly needed at the time. Brick ran in all positions, with all of our mushers, and with just about every dog here at the kennel. He was a friendly, silly, happy-go-lucky dude. He was also very tall and lean. We really enjoyed having him here at our kennel.

Right around Christmas 2016, Brick experienced a severe episode of pancreatitis that ultimately led to his death. He became diabetic and appeared to have many organ issues after overcoming the pancreatitis, but we could not get him to eat regularly, maintain his insulin levels, or gain any weight. He fought a good fight and so did we, but ultimately we knew that the best choice for him and his quality of life was to put him to rest.

Brick has been incredibly influential here. We were fortunate to have one of his best runs ever shortly before his pancreatitis and were so happy that we could get him back out on the trails doing what he absolutely loved for at least a little while. This will always break our hearts, but we are blessed to have known this great dog. 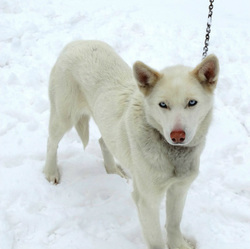 Lizzy came to us from Howling Spirit Racing Siberian Huskies, owned Phil and Kim Ruhl in Bryant, WI. Lizzy was our first "racing dog" and taught us a thing or two about what real working dogs are like. She was a goofy girl who loved to run and play. The saying that "a kennel is an IQ test to a husky" was definitely true for her. She would go under or through fences, and, if those hadn't have worked out for her, she probably would have tried over the top too. She had a silly, happy personality and loved to hold her ears sideways and pretend we couldn't see her. When we got close enough, she'd hop around as if saying "Surprise!" The funny ear set earned her the nickname "Yoda-Dog." As a working dog, Lizzy had fantastic drive. She started on a skijor team and competed in two races, but Amelia found that she did best as a wheel or team dog with others leading her. She really pulled well next to her half brother, Pepé, who she used to run next to at her original kennel as a yearling.

During the spring of 2014, Lizzy started losing weight, stopped eating, and began struggling with her breathing. After a couple trips to the vet, she was diagnosed with idiopathic chylothorax, which is basically when the lung and heart cavity fills with a fatty, protein-rich liquid that is being displaced by the thorax. Our vet wasn't positive what was causing this to happen, but he was 90% certain that she had a mass in her chest. Surgery and treatment procedures weren't very successful for her diagnosis, and after about a week and a half and quickly returning symptoms, we had to make the hardest decision a pet owner and animal lover has to make. Lizzy joined Akeelah over the rainbow bridge just a few months after Akeelah's passing, both far too early. We will miss this happy and goofy girl forever! 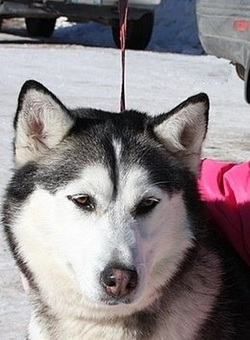 Akeelah was the one who started the love of huskies in our family. We got her from the Vilas County Humane Society in Eagle River, Wisconsin, in December 2006. She was around a year and a half and had been a runaway, living on her own for who knows how long. Those tendencies stuck with her to her last day with us. She was a husky through and through (ran away, dug holes, loved everyone, howled, had a high prey drive, etc.). The first time we introduced her to a harness, she started to step into it, which leads us to believe that she may have had some mushing training in her background. After getting more dogs hooked up with Akeelah, she started to shy away from the whole experience, earning her pet and companion status. We brought her on many trips all over; her favorite place was the stream leading to a lagoon on Madeline Island. She loved to swim across the current to the other side. Akeelah greeted everyone, hated being brushed, refused to be in a kennel, always had a lot to say (in her woo-woo-woo voice that we will miss forever), loved treats (a little too much), and we absolutely adored her. She loved her master, Mike, most of all. She was very aloof about puppies and gave us "the glare" whenever we brought a new dog home. Her best pal was Max, and her favorite game was King of the Hill in the winter.

On November 11, 2013, Akeelah was being a typical husky on the loose after running through our wireless containment system and disrupting the neighbor's chickens. A different neighbor, new to the area and unfamiliar with our dogs, mistook her for a coyote and shot her. It was such a tragic event, and time will never heal that wound to our hearts. We will miss this girl every single day. She was so special and an awesome family member. This is one of those dogs that will never be replaced. We are so sorry that she left us so soon, but we're extremely thankful for the years we had with her. 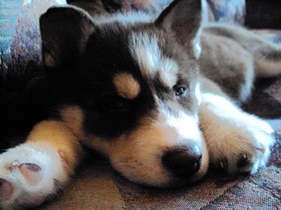 Our first husky puppy was Troika. She was a little spitfire, born in December 2009. We were in love with her dark blue eyes and dark red coat.

We had her for two weeks, and then one night--the first night we left her alone--we had a house fire. She survived the fire itself, but after a difficult struggle with smoke inhalation, we had to put this precious baby to sleep.

She is missed every day. We regret not being able to watch her grow up.